POSTCARD DESIGN SPECIFIC TO KIRKCALDY4ALL. THIS WILL BE ONE OF A SERIES OF POSTCARDS WHICH WILL BE DEVELOPED FOR DIFFERENT STAKEHOLDER GROUPS AND FOR DIFFERENT URBAN SITE LOCATIONS, THAT HAVE BEEN IDENTIFIED AS SPACES FOR REGENERATION OR RENEWAL.
THIS CARD ASKS THE BOARD MEMBERS OF KIRKCALDY4ALL WHAT THEIR INDIVIDUAL FUTURE VISIONS FOR KIRKCALDY WOULD BE. IT IS HOPED THAT A DESIGN WORKSHOP WITH THIS PARTICULAR STAKEHOLDER GROUP WILL UNCOVER NEW IDEAS, WHICH WILL BE ILLUSTRATED FOR THE MDES PROJECT.

Here is the sketch drawing that was presented at today’s meeting.

DRAWN ON TUESDAY 20 MARCH 2012. LINE DRAWING ON A POSTCARD BLANK.
THE IDEA IS TO CONSTRUCT A HIGH LEVEL PROMENADE WALKWAY OR BOARDWALK, WHICH COULD BECOME A REALLY INTERESTING ARCHITECTURAL LANDFORM, UNIQUE TO KIRKCALDY. BY ELEVATING A NEW BOARDWALK, THIS WOULD PROVIDE A BETTER PROTECTION FORM THE HIGH TIDE WAVES and ALONG WITH THE PROPOSED ROCK ARMOUR INSTALLATION, COULD MAKE A FANTASTIC VISITOR EXPERIENCE ENABLING USERS TO HAVE GREAT VISTAS OF THE RIVER FORTH AND KIRKCALDY SANDS, BUT ALSO LET PEOPLE SEE THE KIRKCALDY TOWNSCAPE IN A NEW LIGHT. THE ELEVATED BOARDWALK COULD INCORPORATE A GENTLE UNDULATING FORM TO ADD MORE INTEREST AND A MORE INTERESTING DESIGN SOLUTION.

This drawing will be the inspiration for a more detailed illustration along with relevant and referenced comparisons to reinforce the design development thinking.

Other discussions centred on : 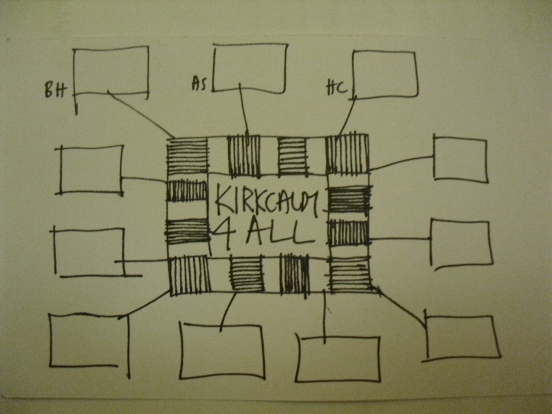 SKETCH DIAGRAM IDENTIFYING KIRKCALDY4ALL AS A STAKEHOLDER GROUP AND WOULD BE THE BASIS FOR A DESIGN DISCUSSION WORKSHOP TO GET THE BOARD MEMBERS TO PARTICIPATE AND FILL IN THE BLANKS WITH THEIR INDIVIDUAL and COLLECTIVE THINKING.

sketch visual for an idea to erect large scale letterforms at a prominent elevated site in the town. Why?
simply, that it would make use of a redundant urban space and the letters would let the public know that KIRKCALDY is important.